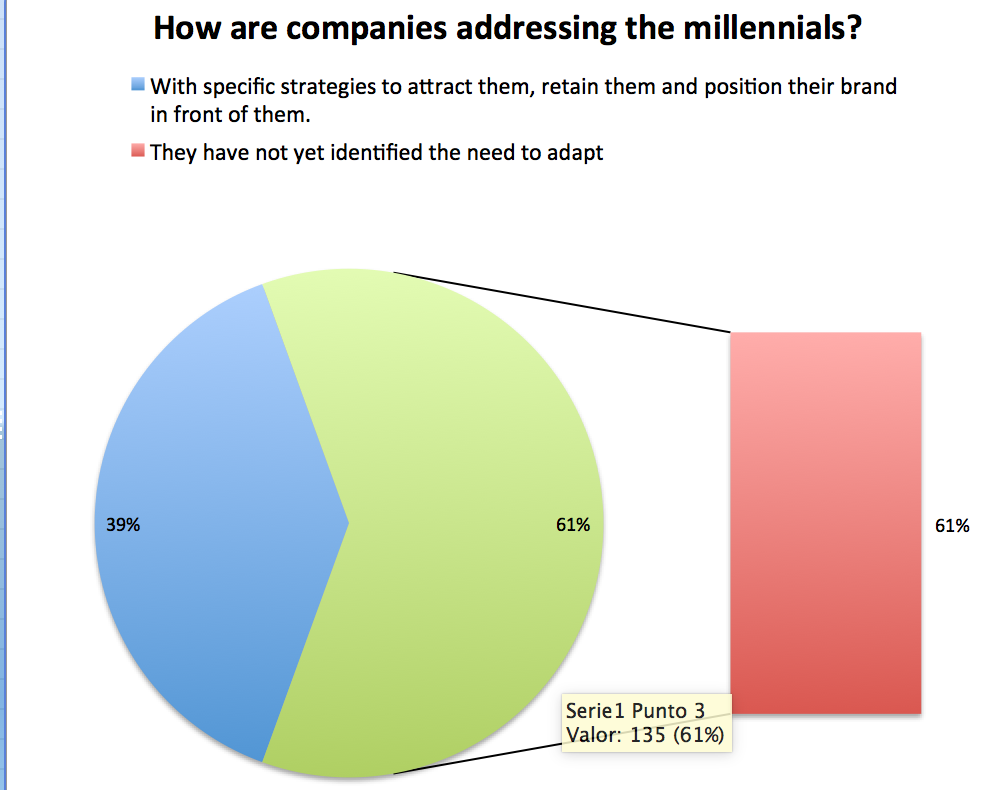 According to a survey carried out by SommerGroup®, where it was consulted about how they are approaching millennials, we can show that, despite the impact of the new generation in the world of work, where they are causing a real revolution in the dynamics of work, less than half of the companies have taken on the challenge of adapting to them. Only 39% are concerned about designing specific strategies to attract them, retain them and position their brand in front of them.

The Millennials Generation defines those born between 1981 and 1995, young people between the ages of 20 and 35 who became adults at the turn of the millennium (in full economic prosperity before the crisis).

They are digital natives. They are characterized by mastering technology. Almost all your basic everyday relationships are mediated by a screen. They are self-sufficient and autonomous. They value participation and collaboration, prefer to share ownership and demand new values such as transparency, sustainability and social commitment.

Millennials are the current generation of consumers, users, and they already represent an important segment of the workforce. A substantial market with new characteristics, needs and demands, which should be known for the repercussions and transformations that this generation is already demanding on companies. This global phenomenon is being addressed by the major powers of the world, because it is an established trend. Their demands are in line to favor their free time, quality of life and to work in what they like to do.

“These characteristics have led to their interests being in line to participate in professional projects, and embarking on the issues that concern them. This has meant that the traditional hook by companies to attract them, presenting them with indefinite contracts, is no longer such an effective trend in the world, because their interest is to work on fixed-terms, by projects, allowing them to own their time. Their purpose is the project itself and they are fully committed to this,” says Andrea Fuenzalida, Manager Evaluation SommerGroup®.

“The challenge for companies today is to redesign communication and attraction strategies for these candidates, developing a proposal of value meeting their characteristics and needs, communicated in association with the brand and the culture of each company as a place to work. Employment branding strategies can be very effective in this scenario. Another special challenge for companies is to rethink the Trainee Programs that are not fitting with the changing interests of the millennials. They should reduce the expectations of permanence in its employees, and focus more on the value per se that they add to the business, more than in a desirable and minimal period of time to stay in the organization, ” finishes the psychologist.

ROJO-They have not yet identified the need to adapt